So, when I was deciding on whether to go to law school or to pursue a masters in fine arts focusing on painting, I came up with a masters thesis with my dear friend, Sara.

Maybe we are both a little too obsessed with the movie, I Heart Huckabees, but we both thought that a whole art show on the theme of “You Rock, Rock,” would be epic. Here is the poem from Huckabees that inspired it all:

The rock just sits, and is

You show us how to just sit there,

and that’s what we need

If you don’t get it, then I don’t know what to tell you. It speaks to me on SO many levels, including the ironic, tongue-in-cheek level to the super-serious OMG-that-is-so-deep level. Whatevs. Don’t judge.

Anywho… back to the point of this tale: I was going to do a series of paintings about rocks. Rocks in all different cultures, different religions, throughout history. Think about it: David used a rock to slay Goliath; the Rock of Gibraltar; the Dome of the Rock; extinction of dinosaurs from a meteor (aka really big rock); the Black Stone (rock in the Kaaba in Mecca); Jesus’s water from a stone; and then even more modern stuff like the expression “rock and roll.”  The list goes ON and ON. Just like rocks do. There was tons of material. Man, was I going to be famous, or what!?!? Right!?!? Or at least I was going to have ridiculously cool artists studio where I created my masterpieces and wear funky jewelry and not bathe regularly.

However, I ultimately chose law school over art school. But, I never gave up on the “You Rock, Rock” painting themes. So I painted Jacob’s Ladder: 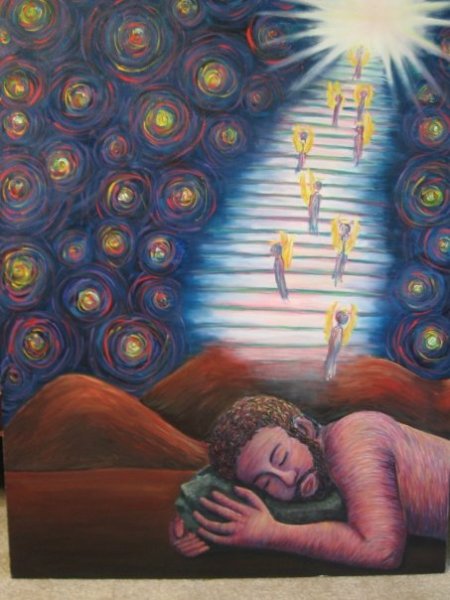 For those of you not familiar with the story, Jacob, the prophet, is wandering in the desert, after the whole thing with his jerky brother Esau, and lays down to sleep. He uses a rock for a pillow. That night he has this crazy dream that there is a ladder or stair running up to heaven and angels are traversing the ladder/stair. At the top is G-d. And G-d tells Jacob that he will be prosperous and multiple and G-d will be with him…yadda yadda yadda… (I am really not religious so much as I am spiritual, but my Sunday school training taught me not to spell out G-d with the full letters and I cannot break the habit). And then Jacob named the place “Bethel” which literally means House of G-d.