I love me some free stuff…

Before I start in on the good part (free stuff), I will warn my growing readership (yay!) that I may be playing around with different appearances on this blog for a bit. Trying to spice things up. Thanks for your patience. Any feedback always appreciated.

Onto the free stuff! Who doesn’t love it? A while ago I had some major scores, but have neglected to share them with you. Until now. I’m first going to post all the before pics, and then, show you what I did with them. I can guarantee that for some things, you are going to say: “Rachel, of course that crap was free. It’s the ugliest thing I’ve ever seen.” And then I’m going to BLOW YOUR MIND. Trust. Or at least, I will make you reconsider, even if your mind isn’t entirely blown.

I believe the secret to good free stuff is karma. And being in the right place at the right time (which I am going to attribute to karma). I think you get good free stuff karma if you give stuff away – on craigslist, on the street corner or to your local thrift store. I believe it all comes back to you.

Back to the story: One weekend, boyfriend and I were driving around Princeton and happened upon TWO awesome free find locations. The first was a guy cleaning out his garage. I initially thought he was having a garage sale because the amount of stuff on the curb was impressive, and because the guy was out in his garage. We stopped, and it turned out all the stuff was free. Boyfriend mumbled a little as I loaded all my treasure into his car, because boyfriend, sweet as he is, sometimes doesn’t share my vision. Few truly do.

Anyway, I got this cool silver tray.

I got these weird figurines.

I got this lamp. 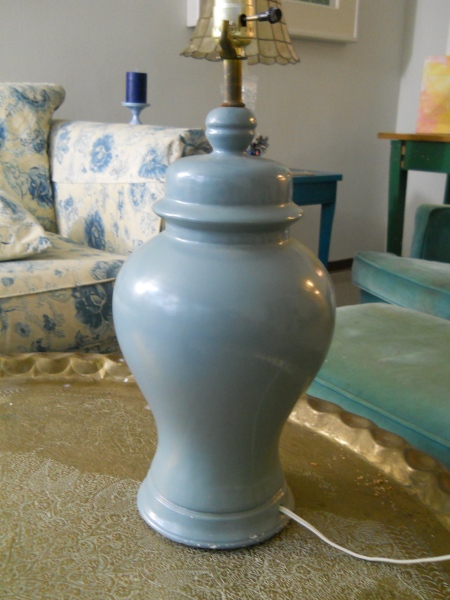 You guessed it, also free!

I also got some picture frames that have yet to be dealt with or photographed. Score!

Later that day, we found this magazine rack on a curb. It was super dirty, but I could tell it was a great find. It’s really old, and already had an awesome chippy paint finish.

Dirty, but that’s what soap and water is for, right? This is a picture of the top.

The dirt was free too!

Now see what I did with all this cool stuff:

First, I spray painted the figurines and the lamp with Krylon spraypaint.

Paint those suckers. (I need to change the lamp shade, I know. One thing at a time.)

Then I arranged them on a table. Voila! 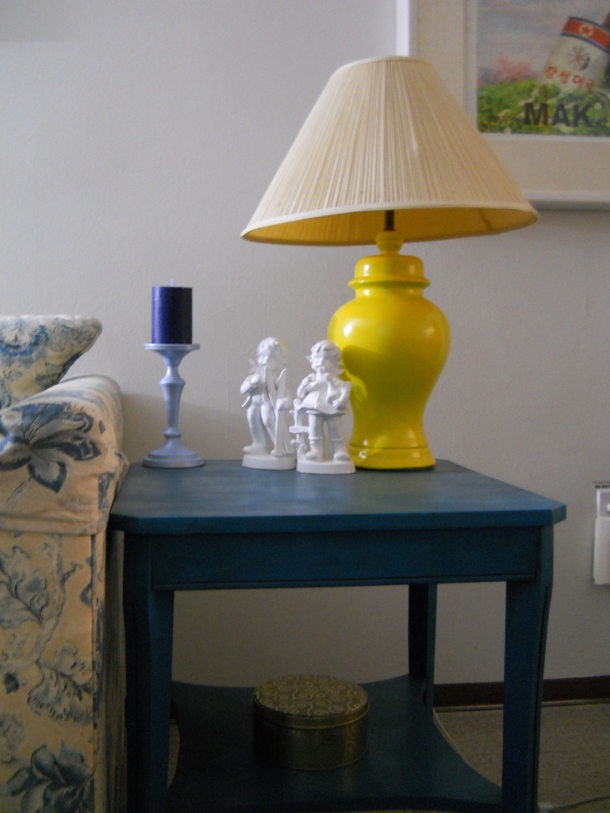 Don’t they look cool? I think so. Plus, having things like this on tables in my apartment helps my apartment feel like a “grown-up apartment,” which I love. And it only cost me $0.00 to do it, since I already had the spray paint! By the way, the couch in this pic was also FREE. Woot!

As for the darling magazine rack, I washed her good with soap and water. Then I sanded her down, because I wanted to get the very loose paint flakes off. Lots of paint flakes came off. Then I did two coats of rub-on poly (satin finish, not gloss) to seal her. She became the center piece for my fall decorations.

Free table and silver tray making a come back!

If you notice, the silver tray is on top of the table, holding the pumpkins and vases. Those two woven basket/boxes were also free when I got the figures, BTW.

Am I going to paint her? No freaking way! People pay a ton of money to buy furniture that looks like they found it on the street. But I got the real thing here.  For example, Anthropologie sells this table for almost $300!

Yeah. Sure. You totally found that at a flee market. Liar!

And Anthropologie has the audacity to call the table a “Flea-Market-Find Table.” I’m pretty sure that Anthropologie is not a flee market. Just a guess. Anyway, I don’t need to pay $300 for my furniture to look old, because either I will make it old myself, or I will actually use old things. Dur. End of Anthropologie rant.

Anyway, I love the look of the chippy paint on the magazine table paired with the silver tray. 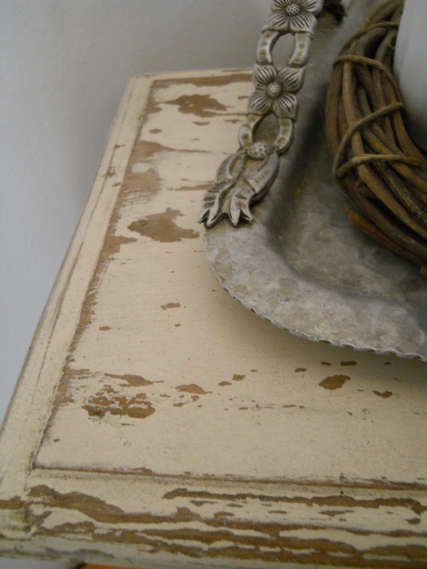 Mixing finishes and genres is what makes decorating interesting.

So I hope this post has inspired you to be more open to free stuff, even if it initially makes you wonder who in their right mind would ever own such a thing. Seeing something ugly is a challenge. So instead of saying no, consider saying, “Challenge accepted. Imma make it awesome.” And do it!

This blog is free. And it’s free to leave me comments, which always make my day!

I love getting your comments. They make me happier than really good carrot cake! Cancel reply