OK, we all now know how much I love fall. But what we may not know is that part of my love of fall stems from getting to eat certain foods that are just inappropriate during spring or summer. That’s right: INAPPROPRIATE! I am laying down the food law.

The first of these fall delights are hearty thick soups. One of my favorites comes from the Moosewood cookbook: Brazilian Black Bean. Now, no offense to Molly Katzen, but I have to say that I liked the first version of this soup better. My parents own the first edition of Moosewood, but I have the second edition that is supposed to be “new and improved” however, I always revert back to the older Brazilian Blackbean Soup Recipe. Sometimes, progress for the sake of progress is no good. 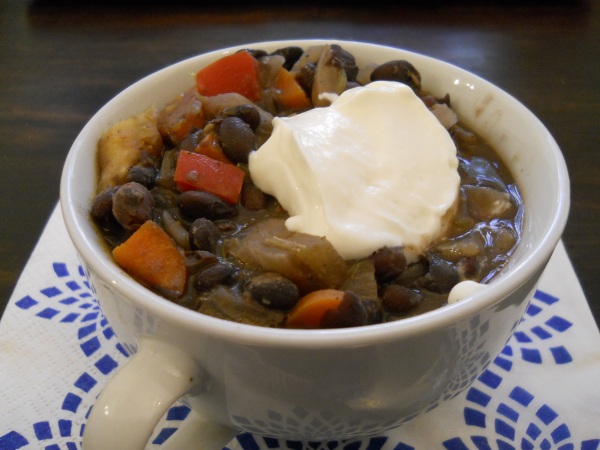 A little cup of heaven.

This slightly spicy black bean soup features chunks of sweet orange, which plays so nicely with coriander and cumin. The result is sweet and tangy, with a bit of a bite (although I guess the bite is optional).

One the same day I made this soup, I also had a major sweet tooth. Which brings me to the second food that is INAPPROPRIATE to eat in spring or summer: PUMPKIN.

I happened to have a half a can of pureed pumpkin left over from the Pumpkin Pull Apart Bread. Not enough for a pie, but I didn’t want it to go to waste. So instead I made three individual pumpkin custards in ramekins. Actually, I made these custards with splenda and fat-free half-and-half, which meant the pumpkin custard was a creamy, pumpkin-y dessert with NO GUILT. Also, anything made individual sized is a million times cuter than something big.  And I had recently scored on a set of four ramekins for a total price of $1.50 at a rummage sale. SCHWING!

Sour cream makes everything better. EVERYTHING.

1. Place rinsed, soaked beans in good soup pot (AKA has a thick bottom that will evenly distribute heat) with about 4 cups of water. Bring to a boil, cover and simmer until tender (about 1 hr, 15 mins). Taste them to make sure they are fully cooked. NOTHING is worse than crunchy beans.

2. Saute onion in olive oil. After a few minutes, add half the garlic, cumin, coriander, salt, carrot and celery. Saute over medium heat until carrot is just tender. Add remaining garlic and bell pepper. Saute for another 10-15 minutes, until everything is tender. Add the contents of this skillet to the FULLY COOKED beans. Not before.

3. Add the orange juice, orange pieces, black pepper and cayenne to taste. If desired, puree some of the soup. I didn’t this time around, but I would say I puree maybe 1 out of three times I make this soup. Simmer soup for another 10 to 15 minutes. Serve garnished with SOUR CREAM.

And for the PUMPKIN CUSTARDS

This is really more like pumpkin-pie filling without the crust. But still custardy enough to call it custard. This recipe is adapted from the Trader Joe’s organic pureed pumpkin can. I am super classy that way. Don’t hate. Also, this recipe is INSANELY easy, and could be made with things I already had on hand. For this reason, it was a great way to deal with my sweet tooth.

Also, I made these custards without sugar and with reduced fat. They were pretty awesome. I can only imagine how totally awesome they would be with full fat/sugar. Either way, a good way to use up leftover pureed pumpkin.

1 Cup pureed pumpkin (approximately 1 Cup, as I mentioned before, I was just trying to use up an already opened can)

1/2 Cup heavy cream (I used fat free half-and-half because it was what I had in my fridge. Turned out pretty tasty)

1/2 tsp pumpkin pie spice blend (or a little cinnamon, nutmeg & clove if you don’t have the blend)

Preheat over to 375F. Mix together all the ingredients. Pour into individual ramekins (there was enough for three ramekins, but this could vary). Back for about 30 to 35 minutes, depending on the size of the ramekins. You want to remove when the filling is set, but still trembles slightly. These taste best right out of the fridge, but they are still pretty good once cooled to room temperature. These would have been even better with some whipped cream (or what I really wanted: sugar-free cool whip. But Wawa apparently doesn’t carry Cool Whip. Sigh. And please stop judging).

I love getting your comments. They make me happier than really good carrot cake! Cancel reply